Importance of wave age and resonance in storm surges: the case Xynthia, Bay of Biscay

Researchers from the joint research unit "Littoral, Environment and Societies" (LIENSs, CNRS / La Rochelle University, team Physical Dynamics of the Littoral) in collaboration with the Portuguese National Civil Engineering Lab (LNEC, Lisbon) have investigated the storm surge associated with the storm Xynthia (February 2010) in the Bay of Biscay, combining in situ measurements with numerical modeling.

Their results show that the exceptional storm surge during Xynthia was amplified by the presence of young and steep waves in the Bay of Biscay, related to the unusual track of Xynthia. This study also shows the occurrence of a resonant phenomenon over the shelf, which explains the development of 6 hour oscillations after the surge peak.

Don’t hesitate to inform us about your news and results

Due to the combination of a wide continental shelf and their position on the track of mid-latitude winter storms, northwestern European shorelines are exposed to storm surges that often exceed 1 m. Low-lying coasts, such as those of the Wadden Sea, Normandy (English Channel) or Pertuis Charentais (Bay of biscay) are thus vulnerable to marine flooding. The storm Xynthia, which severely hit the coasts of Vendée and Charente Maritime (central part of the Bay of Biscay) in the night between the 27th and the 28th of February 2010, reminded this vulnerability. A 970 mbar low-pressure, accompanied with southwestern winds of the order of 100 to 130 km/h (peaks at 160 km/h on Ré island), induced a storm surge with a maximum measured at 1.50 m at La Pallice tide gauge (La Rochelle, Figure 1). The surge peak matched with a high spring tide, causing the overall water level to reach 8 m above marine Chart datum, a value never attained since the deployment of the numerical tide gauge (28th of April 1997, data available at SONEL/REFMAR). Many natural barriers and dykes that protected low-lying zones breached, causing the flooding of large areas and killing 47 peoples and huge material damages estimated to 1.5 billion euros.

The study of Bertin et al. (2012) corresponds to the first step of an integrated research project aiming at investigating storm surges and marine flooding in the central part of the Bay of Biscay. A storm surge numerical modelling system was developed based on the 2DH coupling of the hydrodynamic circulation model SELFE (Zhang et Batista, 2008) and the spectral wave model WaveWatchIII (Tolman, 2009). This modeling system was implemented over the North East Atlantic Ocean and resulted in tidal predictions with errors of the order of 1 to 2 % and wave predictions with errors of the order of 15%. In the Bay of Biscay, the storm surge associated with Xynthia was reproduced with an error of the order of 0.1 m

The analysis of numerical results shows that, in the central part of the Bay of Biscay, the dominant mechanism in the storm surge generation was the SW-oriented winds, which drove an Ekman pumping. This phenomenon corresponds to water transport to the right of the wind direction, due to the Coriolis Effect. The comparison between a quadratic parameterization (wind-dependant only) and a wave-dependant parameterization to compute the wind-induced stress revealed that the storm surge was much more realistically predicted when taking waves into account (Figure 2A). This wind stress is computed based on the wind friction velocity U*, also defined as the ratio between the wave phase speed and the wave age. This friction velocity is thus very important in the presence of young and steep waves, which increase the ocean roughness (Figure 2B). Such young waves were related to the unusual track of Xynthia, which crossed the Bay of Biscay from SW to NE, thereby reducing the fetch to a few hundred kilometers only. 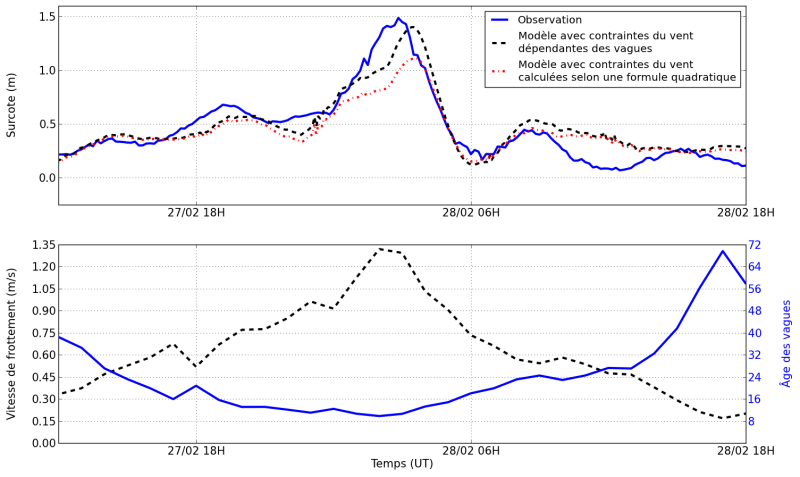 Figure 2. (A) Comparison between the storm surge predicted in La Pallice with a quadratic parameterization (red), a wave-dependant parameterization (black), showing that the second matches much better with the observations (blue). (B) Wind friction velocity (black) used to compute the wind stress and wave age (blue) showing a drop during Xynthia.

Finally, field data as well as numerical results show the occurrence of 6-hour oscillations in the storm surge signal, the height of which reaches 0.4 m in the central part of the Bay of Biscay (Figure 1, blue curve). This 6-hour period corresponds to the resonance period of the continental shelf in the central part of the Bay of Biscay. The researchers of LIENSs have interpreted this phenomenon as resulting from the fast displacement of Xynthia (15-20 m/s) in the Bay of Biscay, which induced a perturbation of the free-surface elevation with a significant amount of energy around the resonant frequency. This energy was then amplified by resonance on the shelf. Works in progress suggest that this phenomenon could be valid at other places around the world’s coastlines, such as the central part of the Gulf of Mexico, of for other long waves, such as tsunamis.