Since the 26th of January 2015, a GNSS permanent station is operationnal at Dieppe tide gauge site.

Please tell us about your new updates at:

From the 19th to the 23rd of January 2015, Dieppe people have witnessed a strong activity going on around their tide gauge. In fact, a team from SHOM came to install a Yagi antenna. This is to transmit real time atmospheric pressure data together with sea level readings to a METEOSAT satellite.

Meanwhile, SONEL people from the University of La Rochelle and IGN installed a steel mast (LECLERC type) on top of the tide gauge concrete shed to support a GNSS antenna. We chose a Leica “choke ring” type AR20 that we connected to a Leica GR25 GNSS receiver.

Despite some network telecommunications issues, the full system is now up and running. The next step is to calculate the reference position of the station post-processing a sufficient amount of measures.

SONEL team would like to thank all people that helped with the success of this operation especially Dieppe harbour that kindly received our new GNSS station. The next GNSS station will be installed in Cherbourg from the 16th to the 21rd of February. 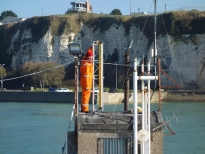 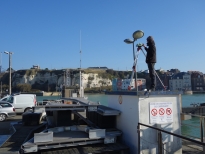